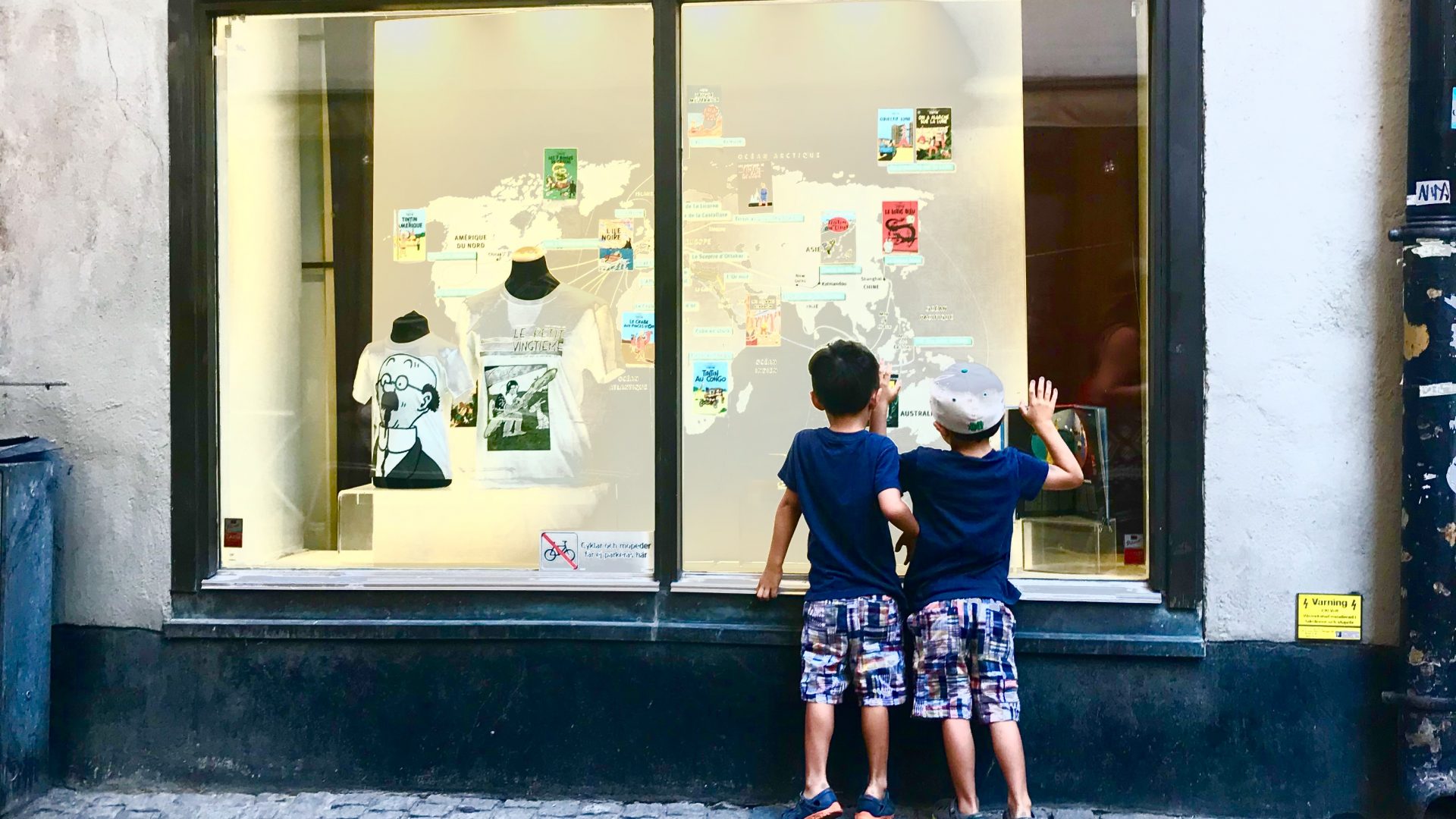 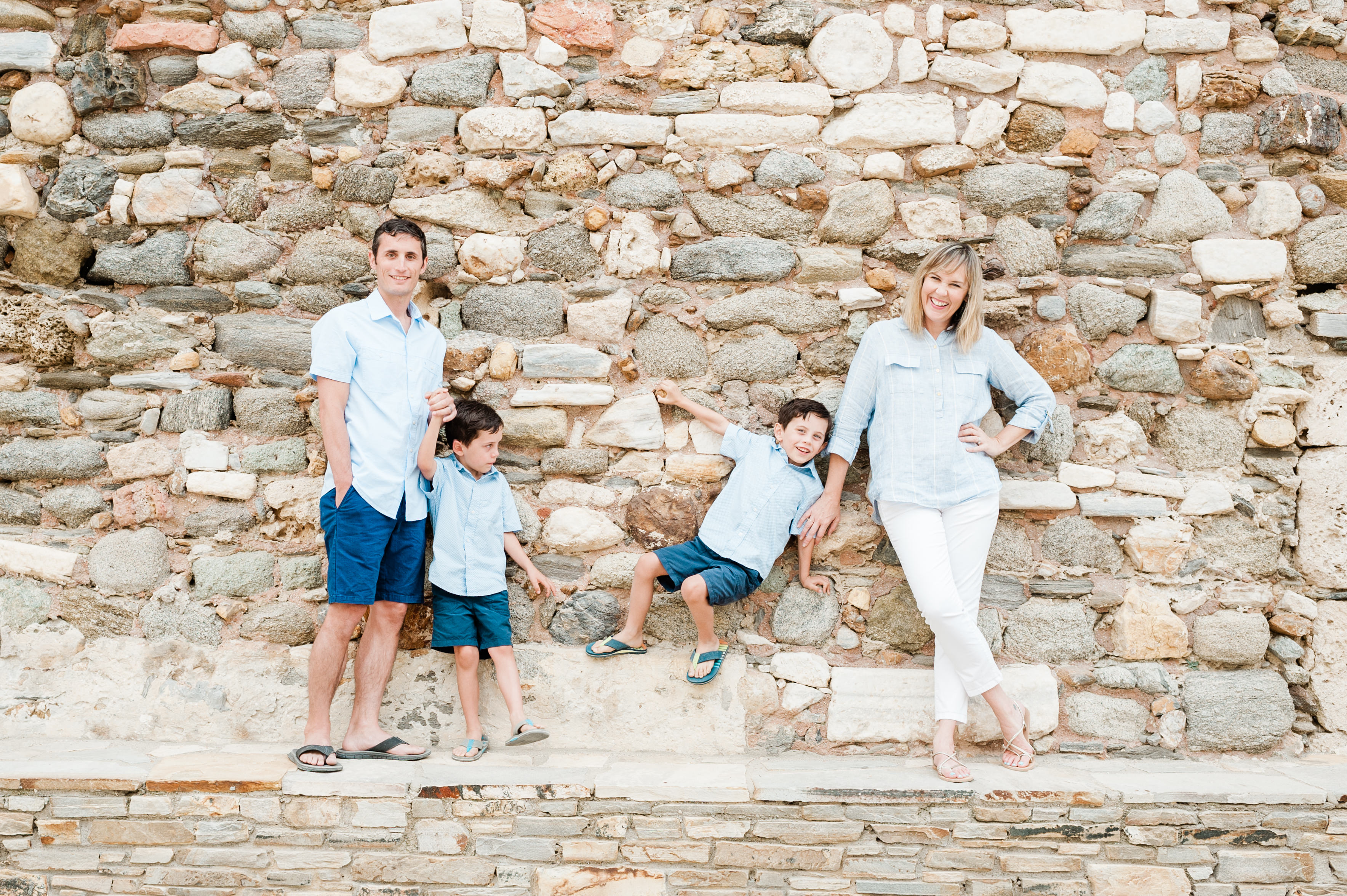 As I watched the wake caused by the ferry and the island of Naxos grow smaller in the distance, I suddenly became very emotional. Never in my travels had I felt so connected to a place after such a short period of time. This was nine and a half years ago. Rob and I spent only three days there, but we knew we would be back. We knew we wanted to take our future children there. The water was so blue, shallow and calm. Add to that a thriving beach area only steps away from a quintessential Greek town with white buildings and blue accents, and you know you have found the absolute perfect place to holiday with young children

I am not even quite sure how I decided we should go to Naxos. At the time, I did not know of anyone who had ever been there. Americans seemed to always go to Mykonos and Santorini, so I guess I was looking for somewhere off the beaten track. Or at least off the beaten track for Americans. We met many Europeans during our travels, most of which declared Naxos to be their favorite Greek island. It is easy to see why.

Many of the Greek islands are busy and over run with tourists. That is not to say that those islands should not be seen and enjoyed. However, Naxos has a more relaxed vibe. I think this has a lot to do with the beach culture of the island. There are no large hills that must be descended to access the blue Mediterranean waters. The beach is flat and sandy with plenty of room for everyone.

We decided it was time to revisit Naxos in May of 2019. Our boys were almost six, and we were so excited to share our favorite island with them. The first couple of days were cloudy, so we spend some time at the beach, but more time eating and drinking. This was fine by us because our whole family could eat Greek food the rest of our lives and be happy. The boys became big fans of chicken souvlaki during this trip, or as they call it “chicken sticks”. I became a big fan of all of the passion fruit cocktails. For me, passion fruit equals vacation!

One of our favorite Greek delicacies is saganaki which is cheese fried in a small frying pan. Naxos has their only special twist on this dish. They smother saganaki in honey and sesame seeds and trust me when I say, it is mind blowing!

Another thing that stands out in my mind about Naxos are the tablecloths. The people are very proud of their island and display their large island on every disposable tablecloth at practically every restaurant.

You really do not need a car in Naxos. Everything is within walking distance if you are fit. However, we did rent a car one day to see if the restaurant we had stumbled up on nine years later was still in the sleepy little village where we had found it.

Naxos is the largest of the Cyclades Islands, and we like to explore more whenever possible, so we rented a car in 2010 to see as much as we could in one day. We were getting hungry by the time we made it to the village of Koronos. We parked at the top of the sleepy village and started walking down endless steps. I am not really sure why we kept walking because we did not see another person, so why we thought there would be food in a town with nobody in it is beyond me. Luckily, we kept walking until we began to hear clanking dishes. Suddenly, we were at tables and a patio. There was no menu. There was no one who spoke English. Matina lead us into her kitchen where we pointed to what we wanted for lunch. We watched donkeys delivering lamb to the village for later consumption. We drank fresh spring water. We ate so much delicious food. The whole experience was splendid! One of those travel memories you will never, ever forget.

This time, we again were not sure if there would be food to eat as we walked further down into the village because it was just as quiet as our first visit. Again, we finally began to here dishes clanking together, so we followed the noise. This time, there were more tables and more people at these tables. We no longer were able to enter the kitchen to point at what we would like to eat. There was a set menu. There was a waiter (assumedly Matina’s son based on their antics) who spoke English. However, the food was as good as we remembered it.

The desert we received at the end of our lunch will never be replicated. We looked for a similar cake for the remainder of our trip, but we were not that lucky. It is probably for the best since it probably would not compare. As the boys enjoyed their dessert, they asked if they could serve it at their upcoming birthday party. I had to break the bad news that this would not happen, but we consider ourselves lucky that we were able to enjoy it once in our lifetime.

Koronos is so quiet that it is hard to believe that anyone lives there, but there are signs of life behind the closed doors, many of which I photographed as we made our way back to our car. We were not quite sure which path we had taken to find Matina’s Tavern, but we did manage to make it back to our car eventually!

I have written so much already and have not even mentioned Naxos Town. You can stay at St. George’s (
aka Agios Georgios) Beach and be only steps away from Naxos Town. Naxos gives you the best of both worlds, beach and the town you expect to see while visiting a Greek Island. While the beach and area leading to Naxos town is flat, the actual town is very steep. There is a castle at the very top which is where we opted to take family photos with a photographer we hired during our trip.

Read More: Having Professional Photos Taken While On Vacation

Our favorite thing to do in Naxos town was to wonder aimlessly. There are so many nooks and crannies to discover.

This trip, we had fun doing some side by side comparisons to our first trip. We have changed, Naxos has changed, but we enjoyed this trip just as much as our first. Naxos is clearly a dependable vacation destination, one that you can rely on to give you special vacation memories time and time again.

One of the reasons we were most excited to visit Naxos with our boys was the shallow water, but our trip was cooler than our previous May trips to Greece. Thus, the boys did not swim much, but I do not think they minded. Our bellies and hearts were full as we departed, as you can see by this last photo we took as we waited for our ferry to Crete.

Like last time, I know we will be back to Naxos. This time, I vow that it will not take nine years to return.